With summer soon to be upon us, sunscreen is a pretty hot topic at Pura Vida at the moment, and one I’m keen to share with you.

We all know how important it is to protect our skin from the sun, right? It’s something that’s been drummed into us from an early age by our parents, doctors, teachers, and a multitude of marketing campaigns. In fact UVA and UVB rays are the primary causes of skin ageing and skin damage, and are commonly linked to skin cancer. So, there really is no question – sun protection is literally the most important thing you can do for your skin. But, what if I told you there are two kinds of sunscreen – Chemical and Physical – and that the former could actually be putting you and our environment at greater risk?

The Body Burden
So let’s think about things from a health perspective to start with.

Chemical sunscreens contain active ingredients (chemical filters) which absorb UV radiation to prevent them from penetrating the skin. However many of these chemicals are actually highly toxic and damaging to our bodies. After all, let’s not forget our skin is a semi-permeable membrane which means much of what we put onto it is absorbed into our blood stream, and fast. And what’s worse is that these chemicals have the ability to bioaccumulate in our bodies, gradually increasing our toxicity over time and disrupting normal bodily functions.

A study in the US called the National Biomonitoring Study is the world’s largest test to determine just how much our bodies are burdened by these synthetic chemicals. The researchers assess exposure to 200 man-made chemicals in 2500 test subjects of varying ages, ethnicities and geographical locations every other year. Through biomonitoring they can assess the environmental chemicals to which people have been exposed and also the amounts of these chemicals that are actually in people’s bodies. The latest results detected known carcinogenic (cancer-promoting), synthetic chemicals in almost 100% of the test subjects, including those chemicals found in chemical sunscreens. In fact, it’s been found that the amount of time these synthetic chemicals can remain in our bodies can be anything from a number of hours up to a number of decades after exposure!

One of the most common and troublesome chemicals found in most high street brands of sunscreen is Oxybenzone. Whilst it’s effective at absorbing UV radiation, it’s also been found to have hormone disrupting qualities and promote the growth of cancer cells (source) – ironically the very thing we’re trying to prevent by using sunscreen in the first place! And worryingly, due to its small molecular size, this is one of those chemicals that can potentially remain in our bodies for years!

According to the Environmental Working Group, “commonly used in sunscreens, the chemical Oxybenzone penetrates the skin, gets into the bloodstream and acts like oestrogen in the body. It can trigger allergic reactions. Data are preliminary, but studies have found a link between higher concentrations of Oxybenzone and health harms. One study has linked Oxybenzone to endometriosis in older women; another found that women with higher levels of Oxybenzone during pregnancy had lower birth weight daughters”. And this is just the tip of the iceberg, there are plenty more studies like these linking Oxybenzone to a vast array of serious health concerns.

Then there’s Retinyl Palmitate (a form of vitamin A). A report published in 2012 by the National Toxicology Program suggests that Retinyl Palmitate may speed the development of skin tumours and lesions when applied to the skin in the presence of sunlight. Again suggesting that “sunscreen products may actually increase the speed at which malignant cells develop and spread skin cancer because they contain vitamin A and its derivatives, Retinol, and Retinyl Palmitate” (Dr Mercola, 2014).

The Environmental Concern
But things don’t just stop there. If all of this wasn’t already scary enough, let’s now look at the environmental issues of using chemical sunscreen, in particular the detrimental impact it’s having on our coral reefs.

The well-being of our coral reefs and marine life is a hotly discussed topic at the moment and it’s easy to see why. Coral reefs are among the most biologically diverse ecosystems on the planet and are really important in the ever-increasing fight against global warming. They serve as ‘carbon sinks’, absorbing carbon dioxide and helping to alleviate climate change to protect the global environment. 90% of the Great Barrier Reef is already dead – a very sad, but true fact.

A recent study published by the Archives of Environmental Contamination and Toxicology found that Oxybenzone (yes, the same Oxybenzone that promotes cancer cell growth and hormone disruption in people) has toxic effects on young coral that causes endocrine disruption, DNA damage to the coral, heightened coral bleaching (a process by which coral lose their pigmentation and subsequently reject symbiotic organisms), and even coral death. And according to the Archives, between 6,000 and 14,000 TONNES of sunscreen end up in coral reef areas each year from swimmers, scuba divers, and snorkellers! Lead researcher and author Omri Bronstein explained how this was a huge amount of sunscreen considering how little it takes for toxic effects to occur – the research shows that toxicity to coral reef occurs at a concentration of 62 parts per trillion. To put that into perspective, that’s the equivalent of one drop of water in an Olympic sized swimming pool! Ultimately, the study concluded that “Oxybenzone poses a hazard to coral reef conservation and threatens the resiliency of coral reefs to climate change”.

So where do we go from here?
I expect you’re wondering why chemical sunscreens are so popular? Well, it’s simple – money. They’re quick and easy to formulate which means they’re cheap. And that’s all.

But fear not, there is light at the end of this very dark tunnel – and it comes in the form of Physical sunscreen! Physical sunscreens use mineral filters (normally zinc oxide and titanium dioxide) that physically reflect and block the sun’s rays – they literally form a suit of armour on your skin. Their particle size is much larger than the chemical filters found in chemical sunscreens which means they aren’t even absorbed into your blood stream. So what’s great is that whilst they’re reflecting the UV rays back into the atmosphere, they’re completely inert, meaning they aren’t causing any other damage to your skin or body. Seems like common sense to me, whilst you’re protecting your skin from the sun’s harmful UV rays, you shouldn’t in the process be causing it any other kind of damage, right?

And furthermore, due to their naturally derived ingredients, using a mineral sunscreen is kinder to the coral reefs and marine life and thus avoids contributing to the problem of climate change as well! Win-win.

Top 5 Reasons for choosing Mineral over Chemical sunscreen:
1. No nasty chemicals absorbed into our bodies.
2. No risk of cancer-promoting cell damage.
3. No hormone disrupting properties.
4. No risk to coral reef and marine life.
5. Does not contribute to climate change and global warming – in fact by switching to a mineral sunscreen, you’ll help to protect the coral reef and slow the rate of global warming.

Introducing Tropic Skin Shade Mineral Sun Protection…
Tropic offer a broad spectrum (protects from UVA and UVB rays), water resistant mineral sunscreen range to keep skin protected from the sun, and prevent premature skin ageing. With an SPF range of 15, 30 and 50, there’s something to suit all. They’ve even got a tinted sun protection for the face when foundation isn’t required. 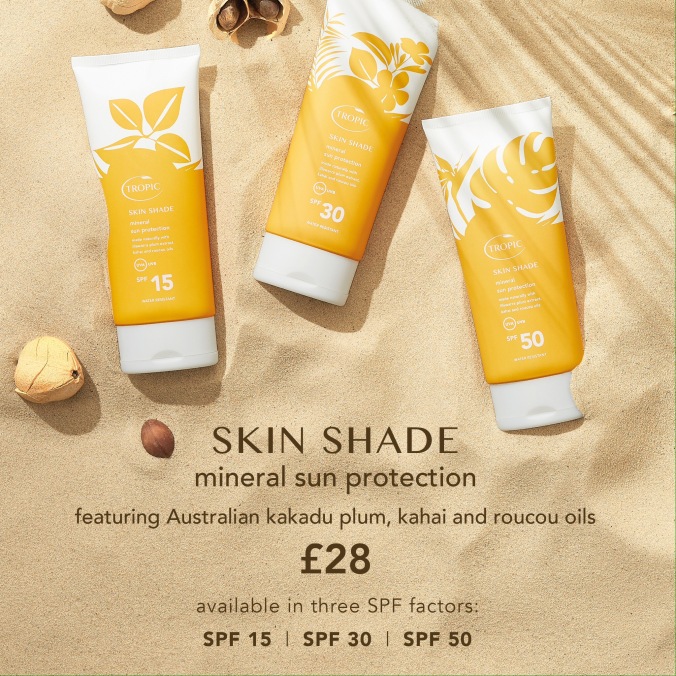 10 Reasons why Tropic Skin Shade should be your go-to sunscreen…
1. Naturally derived.
2. Chemical-free.
3. Fragrance-free which means they’re perfect for children and anyone with sensitive skin. (In fact, before I knew any better, I spent years trying to find a sunscreen that I wouldn’t react to, and it was near impossible! Now I realise that I probably have a sensitivity to Oxybenzone so mineral sunscreen and Tropic Skin Shade in particular has been a game changer for me – no stinging, no rash, no blotchiness!).
4. Water resistant.
5. New innovative technology in the formulation process means Tropic’s sunscreens are much easier to rub in than other mineral sunscreens – even the factor 50.
6. Skin-coloured lotion makes them blend translucently onto the skin, which means you aren’t left looking like a snowman for 10 minutes after application! Always a bonus!
7. Applies as a cream, but dries with a non-sticky, powder finish that’s great for those who hate collecting sand on the beach! (I swear this stuff was made with me in mind!)
8. Extracts of Australian kakadu and illawarra plum provide immediate and long-lasting hydration and nourishment for the skin, and are also rich in antioxidants that protect your skin from free radicals.
9. Two shades of tinted skin shade for the face – perfect for those who want a little bit of coverage whilst make-up free.
10. Cruelty-free and Vegan friendly.

Sound too good to be true?
In a word, No. The only downside is that mineral sunscreen is more expensive to formulate and so it’s a little bit pricier than chemical sunscreen. Tropic’s Skin Shade retails at £28 for 200ml.

There’s no question that we all love a bargain, but surely we’ve all got to start asking ‘at what cost?’. With all things considered, £28 seems like a very small price to pay, doesn’t it?

You can purchase your Tropic Skin Shade direct from Pura Vida here or contact us to find out about free local delivery in the Bath and BANES area.

One thought on “Is your sunscreen actually doing you more harm than good?”